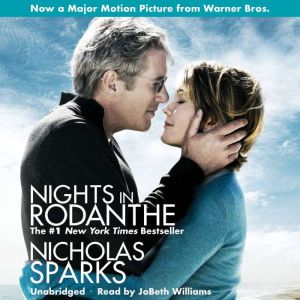 Adrienne Willis is 45 and has been divorced for three years, abandoned by her husband for a younger woman. The trials of raising her teenage children and caring for her sick father have worn her down, but at the request of a friend and in hopes of respite, she's gone to the coastal village of Rodanthe in North Carolina to tend the local inn for the weekend. With a major storm brewing, the time away doesn't look promising...until a guest named Paul Flanner arrives. At 54, Paul is a successful surgeon, but in the previous six months his life has unraveled into something he doesn't recognize. Estranged from his son and recently divorced, he's sold his practice and his home and has journeyed to this isolated town in hopes of closing a painful chapter in his past. Adrienne and Paul come together as the storm brews over Rodanthe, but what begins between them over the weekend will resonate throughout the rest of their lives, intertwining past and future, love and loss.

As with anything written by N. Sparks, this is a winner.

THIS WAS AN AWSOME BOOK. I WOULD READ IT AGAIN.

...you'll like this. Not believable and very predictable. Reminds me why I usually do not read romance novels.

As I listened, it reminded me of a weak reflection of The Bridges of Madison County. And, although it is unabridged,it is missing something. Still, it was too long. The plot was unimaginative and predictable. Maybe this is one where the movie will be better than the book. But heck, it's a romance and it is well read!