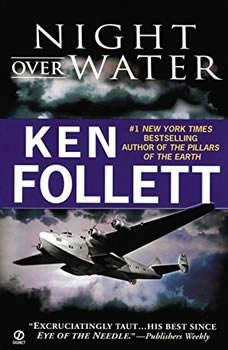 On a bright September morning in 1939, two days after Britain declares war on Germany, a group of privileged but desperate people gather in Southhampton to board the largest, most luxurious airliner ever built - the Pan American Clipper - bound for New York. The passengers include a fascist English aristocrat fleeing with his family and a fortune in jewels; a German scientist escaping from the Nazis; a murderer under FBI escort; a beautiful young woman heading for a new life; and a handsome, charming, unscrupulous thief. They will be in the air for thirty hours, soothed by the carpeted lounges, the curtained beds, the gourmet dining room, and the endless champagne. But once inside the flying palace there is no escape. Over the Atlantic, the Clipper's passengers are gripped by mounting fear and tension as their journey reaches the point of no return.

Even the appalling English accents do not mar Follett's expert touch: character development and plot construction are as good as ever. I am guessing that the sex scenes were added to boost sales but whoever wrote them could sure use some advice from Dr. Ruth.