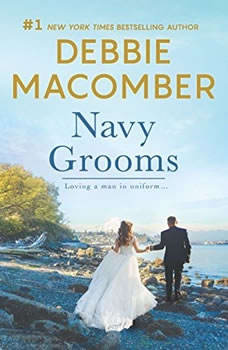 Erin MacNamera has one rule: never fall for a navy man. But from the pulse-stopping moment her eyes meet Lieutenant Brandon Davis’s across a crowded lounge, Erin knows life will never be the same. Sexy, tender and strong, Brandon is all she’d ever dreamed of in a man, but he’s also navy—and as a navy brat from way back, she knows better than to give her heart to a seafaring man.

Busy attorney Catherine Fredrickson loves her job at a submarine base, but her new boss, Royce Nyland, has her spirits sinking fast. The icy single dad is distant, demanding…and incredibly attractive. And though he initially keeps her at arm’s length, together they brew a stormy passion that is impossible to deny. Though the laws of the sea deem naval fraternizing strictly taboo, how long can they resist romance?

The Big Alpha in Town
by Kate Baxter