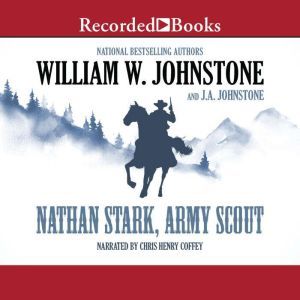 In this blazing new series, William W. and J.A. Johnstone tell the tale of a man who became a myth—and a myth that became a legend. This is the epic story of Nathan Stark, Army Scout . . . Johnstone Justice. What America Needs Now. They slaughtered his family. Killed his young bride. And ever since that tragic day, Nathan Stark has devoted his life to fighting the hostile tribes who massacred those he loved. As a civilian scout for the Army, he's served with such famous commanders as Custer and Crook. He's battled against such notorious war chiefs as Crazy Horse and Sitting Bull. Among the fiercest natives of the untamed west, Nathan Stark is a living legend—one that must be destroyed . . . Against his better judgment, Nathan agrees to be teamed up with a rival Crow scout named Moses Red Buffalo. Their mission: to forge a trail deep into Indian territory under the command of a bloodthirsty army colonel. But the mission is not what it seems. If Stark and Red Buffalo want to stay alive, they'll have to work together as a team—if they don't kill each other first . . . Live Free. Read Hard.