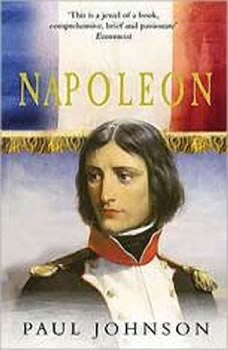 From New York Times bestselling author Paul Johnson, “a very readable and entertaining biography” (The Washington Post) about one of the most important figures in modern European history: Napoleon Bonaparte

In an ideal pairing of author and subject, the magisterial historian Paul Johnson offers a vivid look at the life of the strategist, general, and dictator who conquered much of Europe. Following Napoleon from the barren island of Corsica to his early training in Paris, from his meteoric victories and military dictatorship to his exile and death, Johnson examines the origins of his ferocious ambition. In Napoleon's quest for power, Johnson sees a realist unfettered by patriotism or ideology. And he recognizes Bonaparte’s violent legacy in the totalitarian regimes of the twentieth century. Napoleon is a magnificent work that bears witness to one individual's ability to work his will on history.

Fearless takes you deep into SEAL Team Six, straight to the heart of one of it's most legendary operators. When Navy SEAL Adam Brown woke up on March 17, 2010, he didn't know he would die that night in the Hindu Kush Mountains of Afghanistan--but he...

The unapologetic, laugh-your-ass-off military memoir both vets and civilians have been waiting for, from a five-tour Army Ranger turned YouTube phenomenon and zealous advocate for veterans  Members of the military’s special operations bra...

The #1 New York Times bestselling first-person account of the planning and execution of the Bin Laden raid from a Navy SEAL who confronted the terrorist mastermind and witnessed his final moments. From the streets of Iraq to the rescue of Captain Ri...

The Reaper: Autobiography of One of the Deadliest Special Ops Snipers
by Nicholas Irving

The Last Punisher is a bold, no-holds-barred first-person account of the Iraq War. With wry humor and moving testimony, Kevin Lacz tells the story of his tour in Iraq with SEAL Team Three, the warrior elite of the Navy. This legendary unit, known as...

Navy SEAL Marcus Luttrell returned from his star-crossed mission in Afghanistan with his bones shattered and his heart broken. So many had given their lives to save him-and he would have readily done the same for them. As he recuperated, he wondere...

The extraordinary, real-life adventure of three brothers at the center of the most dramatic turning points of World War II and their mad race to change history—and save one of their own.They are three brothers, all Navy men, who end up coincid...