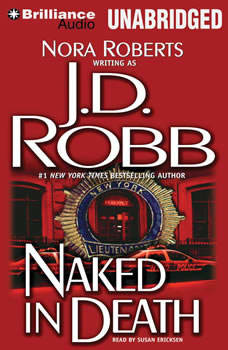 THE FIRST NOVEL IN THE #1 NEW YORK TIMES BESTSELLING IN DEATH SERIESIt is 2058, New York City. Technology now completely rules the world, but for New York Detective Eve Dallas, one irresistible impulse still rules the heart: passion…Eve Dallas is a New York police lieutenant hunting for a ruthless killer. In over ten years on the force, she’s seen it all—and knows her survival depends on her instincts. And she’s going against every warning telling her not to get involved with Roarke, an Irish billionaire—and a suspect in Eve’s murder investigation. But passion and seduction have rules of their own, and it’s up to Eve to take a chance in the arms of a man she knows nothing about—except the addictive hunger of needing his touch.

The narration is very good and probably earned this book an extra star, otherwise I would have given this book only 1 star. It starts off okay, but it turns hammy quickly when dramatic love insterest details dominate the plot. My wife would probably love this book for the romance but I can't get into that chick romance stuff in books. If you like romance and science fiction and detective books then you'll probably like this like as 200 other people did who gave this 5 stars. But if you're a typical guy like me, you will probably want to throw this book out the window halfway through the 3rd disk.

I had read one, maybe 2, random books in this series, but now I decided to start from the beginning. This is the first book in the in death series, which is above eve dallas, a police detective in the 2050s. I love how it's set in the near future..its so the same but so different..real coffee is a luxury, and everyone drinks fake coffee and fake sugar. Guns are outlawed and antiques. Prostitution is legal. Lots of small little details too throughout the book. Eve is a great character who I would like to know, and Roarke too. It sort of reminds me of the Laurell K. Hamilton anita blake series, even though there's nothing supernatural about it. I'm excited to read more in this series which I think is up to 30ish books now!

Naked in Death
In Death Series #1