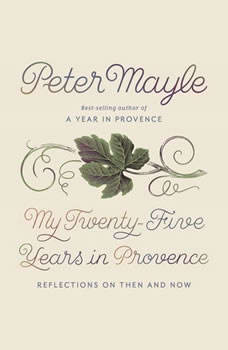 My Twenty-Five Years in Provence: Reflections on Then and Now

The beloved author Peter Mayle, champion of all things Provence, here in a final volume of all new writing, offers vivid recollections from his twenty-five years in the South of France--lessons learned, culinary delights enjoyed, and changes observed.

Twenty-five years ago, Peter Mayle and his wife, Jennie, were rained out of a planned two weeks on the Côte d'Azur. In search of sunlight, they set off for Aix-en-Provence; enchanted by the world and life they found there, they soon decided to uproot their lives in England and settle in Provence. They have never looked back. As Mayle tells us, a cup of café might now cost three euros--but that price still buys you a front-row seat to the charming and indelible parade of village life. After the coffee, you might drive to see a lavender field that has bloomed every year for centuries, or stroll through the ancient history that coexists alongside Marseille's metropolitan bustle. Modern life may have seeped into sleepy Provence, but its magic remains.

With his signature warmth, wit, and humor--and twenty-five years of experience--Peter Mayle is a one-of-a-kind guide to the continuing appeal of Provence. This thoughtful, vivid exploration of life well-lived, à la Provence, will charm longtime fans and a new generation of readers alike.