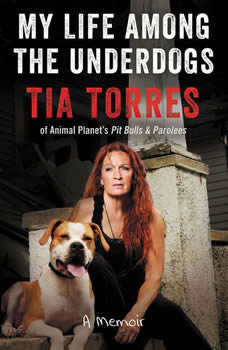 My Life Among the Underdogs: A Memoir

From one of the most respected figures in the dog rescue community come the harrowing, funny, and inspiring stories of nine incredible dogs that shaped her life.Tia Torres, beloved underdog advocate and star of Animal Planets hit show Pit Bulls & Parolees, chronicles her roller-coaster life in this heartwarming memoir featuring some of her best-loved dogs. With inimitable honesty and characteristic brashness, Tia captures the spirit and heart of these intelligent and loving canines, while carrying us behind the scenes of her TV show, into the heart of post-Katrina New Orleans, onto the soundstages of Hollywood films, and even to the jungles of Sri Lanka.Tia has devoted her life to shattering the stereotype that Pit Bulls are dangerous, vicious predators. As the top dog at the Villalobos Rescue Center in New Orleans, the largest Pit Bull rescue in the United States, she and her team have rescued, rehabilitated, and re-homed hundreds of animals that might otherwise have been destroyed. As she puts it, Most of the stories in this book are about animals (and a few humans) that needed someone to believe in them and a purpose in order to show their true nobility.Each dog Tia writes about here has overcome abuse, trauma, neglect, or just bad luck to become a stalwart, loving companion to Tia and her family. You'll meet Duke, whose intelligence and matinee-idol looks made him a star in movies and music videos; Junkyard Joe, whose singleminded passion for tennis balls was channeled into expertise as a drug-sniffing dog; Bluie, the unswerving protector of Tia's daughter Tania; and a host of other unforgettable canines.My Life Among the Underdogs is above all a love story one that is sure to grip the heart of anyone who has ever owned or been owned by a dog.