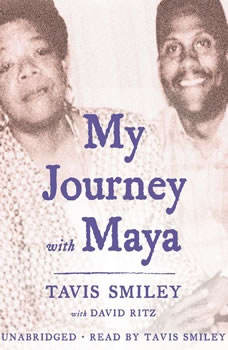 My Journey with Maya

A remarkable story of friendship, love, and courageWhen Maya Angelou and Tavis Smiley met in 1986, he was twenty-one and she was fifty-eight. For the next twenty-eight years, they shared an unlikely, special bond. Angelou was a teacher and a maternal figure to Smiley, and they talked often, of art, politics, history, race, religion, music, love, purpose, and--more than anything--courage. Courage to be open, to follow dreams, to believe in oneself.In My Journey with Maya, Smiley recalls a joyful friendship filled to the brim with sparkling conversation--in Angelou's gardens surrounded by her caged birds, before lectures, sharing meals, and on breaks from it all, they sought each other out for comfort, advice, and above all else, friendship.It began when he, a recent college graduate and a poor kid from a big family in the Midwest, was invited to join the revered writer on a sojourn to Africa. He would be handling her bags, but Maya didn't let that stop a friendship waiting to happen. Angelou was generous, challenging, and inspirational. Like a mother to him, she was selfless.Here Tavis Smiley shares his personal memories of Maya Angelou, of a decades-long friendship with one of history's most fascinating women, one who left as indelible an imprint on American culture as she did on him.