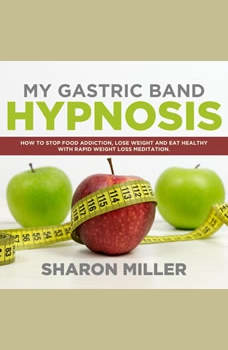 A hypnotic gastric band is an ideal booster for you if:

- You need to lose more than 30 pounds to accomplish a thin, healthy body weight.

- You have consistently been overweight.

- You have lost weight by dieting previously and along these lines added everything back on again and gained even more.

- You have discovered that it was hard to perceive the minute when your body is letting you know that you have eaten enough.

The hypnotic gastric band permits you to reset the neuro-physiological feedback system. By restricting the portion of food you can eat, you re-sensitize the stomach, and it signals "fullness" to you rapidly.

The gastric band (also called a lap band) has become an ever more popular treatment for those who want to lose weight over the last decade. A band is installed around the stomach and inflated to greatly reduce the ability of the stomach. This means that the patient eats less food, which results in a quick and lasting loss of weight. Nevertheless, gastric band surgery is not risk-free. There is always the inherent risk of anything going wrong, but the lap band can also cause certain problems specifically. This includes a slipping band (which can result in too much or not enough stomach capacity), acid reflux, nausea, disease, diarrhea, regeneration, blockage, and other problems.

But would it not be awesome if the performance of the gastric band could be repeated without any risk?

THIS IS WHY THIS BOOK IS A MUST RID FOR ANYONE LOOKING TO PERMANENTLY LOSE WEIGHT!!!

The Anatomy of Hope
by Jerome Groopman

Me and the Orgone
by Orson Bean

The Cannabis Manifesto
by Steve DeAngelo