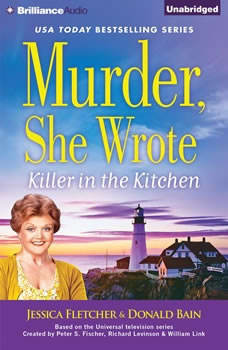 Murder, She Wrote: Killer in the Kitchen

In the latest in the USA Today bestselling series, someone writes a recipe for murder.…Jessica loves the Fin & Claw restaurant, owned by young couple Brad and Marcie. And the restaurant is the couple’s dream come true. But when famed chef Gerard Leboeuf decides to open an eatery right next to theirs, tensions rise fast and hot—and lead to a nasty confrontation between Leboeuf and Brad. So when Leboeuf is found dead with a knife planted in his chest, Brad becomes suspect number one. But plenty of others had a motive to kill Leboeuf, and it’s up to Jessica to uncover who really added murder to the menu.