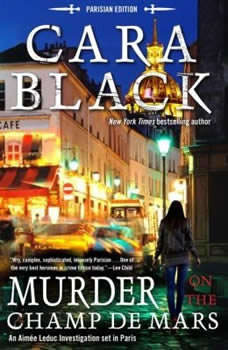 Murder on the Champ de Mars

The fifteenth mystery in Cara Black's New York Timesbestselling AimEe Leduc series takes us to the seventh arrondissement--the quartierof Paris's moneyed elite. A young manouche(French-born Gypsy) boy begs AimEe Leduc to come visit his ailing mother, who supposedly knows a secret behind AimEe's father's unsolved murder. AimEe reluctantly agrees to meet with her, only to discover that deathly ill manouche woman has been abducted from the hospital bed, pitting AimEe against the clock to find the woman--and learn her secret--before she dies without her medication. The New York Timesbestselling AimEe Leduc series is one of Soho's all-time bestselling mystery series. Cara's thirteenth AimEe Leduc novel, Murder Below Montparnasse, received excellent critical review coverage, made the New York Timesbestseller list and solidified Cara Black as a household name. Cara's fourteenth book, Murder in Pigalle, was accompanied by a month of book events that landed her on two national bestseller lists ( San Francisco Chronicle, Seattle Times) for several weeks. Paris, February 1998: AimEe Leduc has her work cut out for her--running her detective agency and fighting off sleep-deprivation as she tries to be a good single mother to her new bEbE. The last thing she has time for now is to take on a personal investigation for a poor manouche (French Gypsy) boy. But he insists his dying mother has an important secret she needs to tell AimEe, something to do with AimEe's father's unsolved murder a decade ago. How can she say no? The dying woman's secret is even more dangerous than her son realized. When AimEe arrives at the hospital, the boy's mother has disappeared. She was far to sick to leave on her own--she must have been abducted. What does she know that is so important it is worth killing for? And will AimEe be able to find her before it is too late and the medication keeping her alive runs out? Set in the seventh arrondissment, the quartier of the Parisian elite, Murder on the Champ de Mars takes us from the highest seats of power in the Ministries and embassies through the city's private gardens and the homes of France's oldest aristocratic families. AimEe discovers more connections than she thought possible between the clandestine "Gypsy" world and the moneyed ancien rEgime, ultimately leading her to the truth behind her father's death . . . After all, for AimEe, murder is never far from home.

Murder on the Champ de Mars
The Aimée Leduc series #15