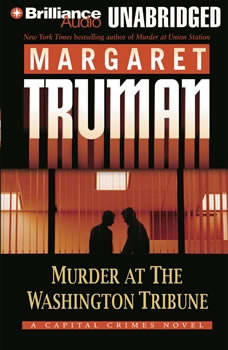 Murder at The Washington Tribune

From senators to summer interns, from all the president’s men to all-powerful women, Margaret Truman captures the fascinating, high-wire drama of Washington, D.C., like no other writer. Now this master of mystery fiction takes us into the capital’s chaotic fourth estate. At the big, aggressive newspaper The Washington Tribune, a young woman has been murdered. And the hunt for her killer is making sensational and lethal headlines.The victim, fresh out of journalism school, hoped to make a splash at the Trib—and then a maintenance man found her in a supply closet, brutally strangled to death. The Trib’s journalists are at once horrified and anxious to solve the crime before the cops do, and put this scandal to rest. But the Metropolitan Police Department isn’t going to let byline-hungry reporters get in the way of its investigation, and soon enough the journalists and the cops have established warring task forces. Then a second woman is killed, in Franklin Square. Like the first, she was young, attractive, and worked in the media.For veteran Trib reporter Joe Wilcox, whose career is mired in frustration and disappointment, the case strikes close to home. His daughter is a beautiful rising TV news star. As his relationship with a female MPD detective grows more intimate, Joe sees a chance to renew himself as a reporter and as a man. Spearheading the Trib’s investigation, he baits a trap for the killer with a secret from his own past.Suddenly Joe is risking his career, his marriage, and even his daughter’s life by playing a dangerous game with a possible serial killer, while a police detective is bending rules for the reporter she likes and trusts but may not know as well as she thinks she does. As Joe’s daughter finds herself trapped at the heart of a frantic manhunt, the walls come down between family, friendship, ethics, and ambition—and a killer hides in plain sight.

Murder at The Washington Tribune
The Capital Crimes Series #21