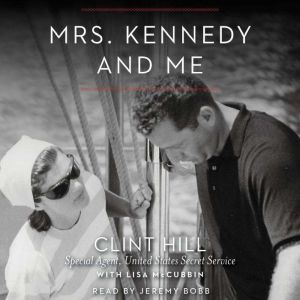 Mrs. Kennedy and Me: An Intimate Memoir

An intimate and fascinating memoir by Clint Hill, who spent four years as First Lady Jacqueline Kennedy’s Secret Service agent. Even today, decades after JFK’s presidency and Jackie’s death, the public continues to be fascinated with the former First Lady. Clint Hill will forever be remembered as the agent who jumped onto the car after President Kennedy was shot and clung to the sides of the car as it sped toward the hospital. Now, in Mrs. Kennedy and Me, he recounts those painful memories along with his fonder recollections of the First Lady’s strength, class, dignity, and beauty during the time he was assigned as her personal agent.     Hill was by Mrs. Kennedy’s side for some of the happiest moments in her life as well as the darkest. He was there for the birth of John, Jr. as well as for the birth and sudden death of Patrick Bouvier Kennedy on August 8, 1963. Hill was there for Jackie’s first meetings with men like Aristotle Onassis, Gianni Agnelli, and Andre Malraux; Jackie’s trips to Europe, Asia, and South America; Kennedy-family holidays in Hyannis Port; and the dark days following the assassination. They addressed each other as “Mrs. Kennedy” and “Mr. Hill,” even though they were often closer to each other than they were to their respective spouses—yet their relationship remained professional. An astonishing and intimate portrait, told for the first time, Mrs. Kennedy and Me is a remarkable and true story of heroism, heartbreak, and humanity.