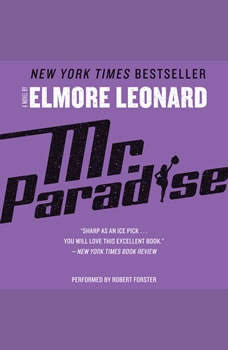 “Sharp as an ice pick….You will love this excellent book.”—New York Times Book ReviewElmore Leonard is the undisputed master, the “King Daddy of crime writers” (Seattle Times), in the august company of the all-time greats of mystery/noir/crime fiction genre: John D. MacDonald, Dashiell Hammett, James M. Cain, et al. The creator of such unforgettable classics as Stick, Out of Sight, and Get Shorty—not to mention the character of U.S. Marshal Raylan Givens, lately of TV’s hit series Justified—Leonard is in fine form with Mr. Paradise. A riveting Detroit-based thriller enlivened by Leonard’s trademark razor-sharp dialogue, Mr. Paradise follows a smart Victoria’s Secret model’s attempt to score big after surviving a double murder in a millionaire’s mansion…with a lonely cop acting as spoiler.

A troubled young woman breezes into Detective Robicheaux's hometown of New Iberia, Louisiana. She happens to be the daughter of his friend -- a friend he witnessed gunned down in a bank robbery, a tragedy that forever changed Robicheaux's life. Th...