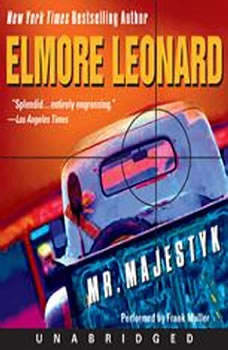 “Splendid…entirely engrossing.”—Los Angeles Times“First-rate…an excellent thriller…well-plotted and smoothly written…crackles with suspense.”—Bergan RecordA classic crime novel, Mr. Majestyk is vintage Elmore Leonard—an edgy, dark, fiendishly compelling tale of a quiet man making a whole lot of noise.  “The best writer of crime fiction today” (USA Today)—the acclaimed author who brought the world Raylan Givens, the  trigger-happy U.S. Marshal who lights up  TV screens across America in the hit series Justified—Leonard makes a big noise himself with this timeless noir tale of personal justice and brutal vengeance. When a war veteran Arizona farmer loses everything, ruined by the local mob, he decides to fight back in this masterful crime fiction thriller—early proof that Leonard not only belongs in the company of John D. MacDonald, Dashiell Hammett, James M. Cain, Robert B. Parker and the other great names in American mystery and suspense…he is, in fact, “The King Daddy of crime writers” (Seattle Times).