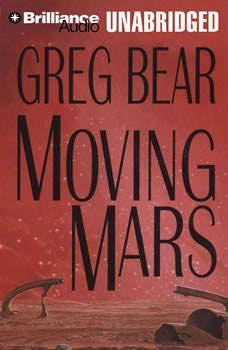 Greg Bear is "a writer who is rapidly redefining the shape of the modern hard science fiction novel" (Keith Ferrell, Omni Magazine), and in Moving Mars he explores one very plausible scenario for the future of Earth's neighboring planet.Mars is a colonial world governed by corporate interests on Earth. The citizens of Mars are hardworking, brave, and intelligent, but held back by their lack of access to the best education, and the desire of Earthly powers to keep the best inventions for themselves. The young Martians - the second and third generation born on Mars - have little loyalty to the Earth, and strong belief that their planet can be independent. The revolution begins slowly, but matures to its inevitable conclusion.

The search for the Builders has led expert Darya Lang, adventurer Hans Rebka, and treasure hunters Louis Nenda and Atvar Hsial far outside the spiral arm, where they must confront the Zardalu who enslave entire races and exterminate others.

Tom, a historian, and his girlfriend Sharon, a theoretical physicist, become interested in the story of a small German town that disappeared in the fourteenth century and was never resettled. What they discover is that the village was the site of an...

A Time of Changes
by Robert Silverberg

Set in the distant future, when human beings populate a variety of planets, A Time of Changes examines the society of Borthan. For thousands of years, Borthan has been ruled by a covenant that teaches that the individual self is to be despised. The ...