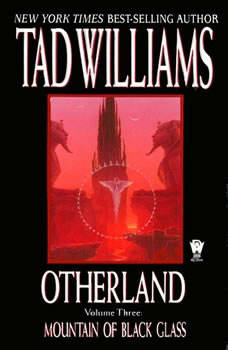 Mountain of Black Glass is the third volume of Tad Williams' highly acclaimed four-book series, Otherland. A truly unique reading experience combining elements of science fiction,fantasy, and techno-thriller, it is a rich epic tale in which virtual reality could prove the key to a whole new universe of possibilities for the entire human race--or become the exclusive domain of the rich and the ruthless as they seek a technological pathway to immortality....

A group of adventurers searching for a cure for comatose children find themselves trapped in a sequence of virtual worlds, the only opponents of a conspiracy of the rich to live forever in a dream. Now, they are forced to make an uneasy alliance wit...