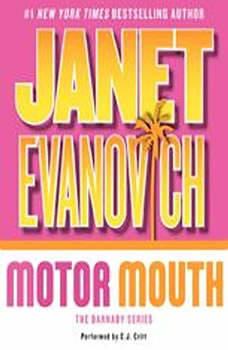 It's the last race of the season, and the wheels are smoking and the temperature is rising at Homestead-Miami Speedway. Alexandra Barnaby is NASCAR driver Sam Hooker's raceday spotter, his eye-in-the-sky, telling Hooker when to pass and when to get off the gas. From her vantage point high above the grandstand she's also seeing things going on in the infield that will change her life. Things that will lead to a stolen racecar hauler, a kidnapped Saint Bernard, a bizarre murder, some restless nights under the covers with Hooker, and a reunion with super cigar roller Rosa Florez and the queen of wholesale fruit Felicia Ibarra.From Miami, Florida to Concord, North Carolina and back to Miami this is an action-packed multi-car crash of shady dealings, stolen technology, drive-thru windows and destruction of personal property. Everything you always wanted to know about righteous indignation, stealing an eighteen-wheeler, stashing a dead body, and sex in the fast lane. Performed by C.J. Critt

This book is a total waste of time! I do not recommend it at all. Pity she didn't kill off all the characters and be done with it!!!