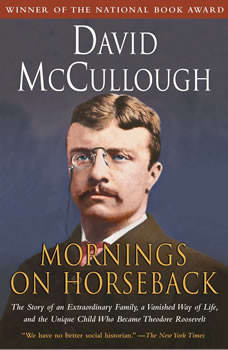 FROM THE #1 NEW YORK TIMES BESTSELLING AUTHOR OF JOHN ADAMS Winner of the 1982 National Book Award for Biography, Mornings on Horseback is the brilliant biography of the young Theodore Roosevelt. Hailed as a masterpiece by Newsday, it is the story of a remarkable little boy -- seriously handicapped by recurrent and nearly fatal attacks of asthma -- and his struggle to manhood. His father -- the first Theodore Roosevelt, "Greatheart," -- is a figure of unbounded energy, enormously attractive and selfless, a god in the eyes of his small, frail namesake. His mother -- Mittie Bulloch Roosevelt -- is a Southerner and celebrated beauty. Mornings on Horseback spans seventeen years -- from 1869 when little "Teedie" is ten, to 1886 when he returns from the West a "real life cowboy" to pick up the pieces of a shattered life and begin anew, a grown man, whole in body and spirit. This is a tale about family love and family loyalty...about courtship, childbirth and death, fathers and sons...about gutter politics and the tumultuous Republican Convention of 1884...about grizzly bears, grief and courage, and "blessed" mornings on horseback at Oyster Bay or beneath the limitless skies of the Badlands.

Richard Nixon
by John A. Farrell

The Case for Trump
by Victor Davis Hanson

Destiny and Power
by Jon Meacham

Long Walk to Freedom: The Autobiograp...
by Nelson Mandela