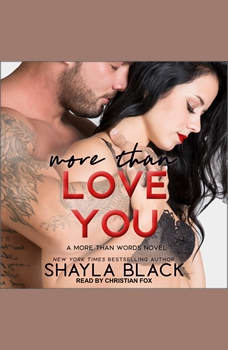 More Than Love You

I'm Noah Weston. For a decade, I've quarterbacked America's most iconic football team and plowed my way through women. Now I'm transitioning from star player to retired jock—with a cloud of allegation hanging over my head. So I'm escaping to the private ocean-front paradise I bought for peace and quiet. What I get instead is stubborn, snarky, wild, lights-my-blood-on-fire Harlow Reed. Since she just left a relationship in a hugely viral way, she should be the last woman I'm seen with. On second thought, we can help each other . . . I need a steady, supportive "girlfriend" for the court of public opinion, not entanglements. Harlow is merely looking for nonstop sweaty sex that wrings pleasure from her oh-so-luscious body. Three months—that's how long it should take for us both to scratch this itch and leave our respective scandals behind. But the more I know this woman, the less I can picture my life without her. And when I'm forced to choose, I'll realize I don't merely want her in my bed or need her for a ruse. I more than love her enough to do whatever it takes to make her mine for good. Contains mature themes.

Meeting his celebrity crush was one thing, but even Hollywood could not have written what happened next. Inspired by E.L. James’ international phenomenon, 50 Shades of Grey, Jeffery Self’s 50 Shades of Erotica/Gaytells the story of a you...

More Than Love You
More Than Words #3

More Than Need You
More Than Words #2