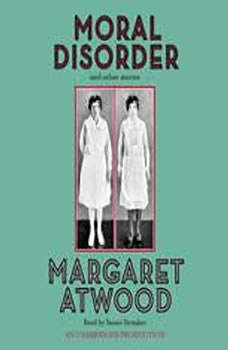 Atwood triumphs with these dazzling, personal stories in her first collection since Wilderness Tips.

In these ten interrelated stories Atwood traces the course of a life and also the lives intertwined with it, while evoking the drama and the humour that colour common experiences — the birth of a baby, divorce and remarriage, old age and death. With settings ranging from Toronto, northern Quebec, and rural Ontario, the stories begin in the present, as a couple no longer young situate themselves in a larger world no longer safe. Then the narrative goes back in time to the forties and moves chronologically forward toward the present.

In “The Art of Cooking and Serving,” the twelve-year-old narrator does her best to accommodate the arrival of a baby sister. After she boldly declares her independence, we follow the narrator into young adulthood and then through a complex relationship. In “The Entities,” the story of two women haunted by the past unfolds. The magnificent last two stories reveal the heartbreaking old age of parents but circle back again to childhood, to complete the cycle.

By turns funny, lyrical, incisive, tragic, earthy, shocking, and deeply personal, Moral Disorder displays Atwood’s celebrated storytelling gifts and unmistakable style to their best advantage. This is vintage Atwood, writing at the height of her powers.