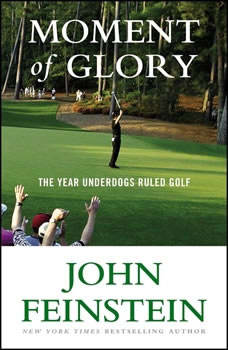 After winning 6 of the 12 Majors from 2000 to 2002, Tiger Woods struggled in 2003. Four unknown golf players--Mike Weir, Jim Furyk, Ben Curtis, and Shaun Micheel--would seize the day, rising to become champions in his wake.Mike Weir--considered a good golfer but not a great one--triumphed in The Masters, becoming the first Canadian to win a Major. Jim Furyk emerged victorious in the U.S. Open. In the British Open, Ben Curtis became the only player since Francis Ouimet in 1913 to prevail on his first time out, and Shaun Micheel came from nowhere to prevail at the PGA Championship. How does one moment of glory affect the unsung underdog for years to follow?In Moment of Glory, John Feinstein returns to the unlikely year of 2003 and chronicles the personal and professional struggles of these four players. With great affection for the underdog and extraordinary access to the players, he then looked to the 2008 season, giving readers an insider's look into how winning (and losing) major championships changes players' lives.