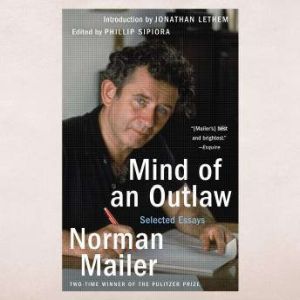 Mind of an Outlaw: Selected Essays

Norman Mailer was one of the towering figures of twentieth-century American letters and an acknowledged master of the essay. Mind of an Outlaw, the first posthumous publication from this outsize literary icon, collects Mailer’s most important and representative work in the form that many rank as his most electrifying.As America’s foremost public intellectual, Norman Mailer was a ubiquitous presence in our national life—on the airwaves and in print—for more than sixty years. With his supple mind and pugnacious persona, he engaged society more than any other writer of his generation. The trademark Mailer swagger is much in evidence in these pages as he holds forth on culture, ideology, politics, sex, gender, and celebrity, among other topics. Here is Mailer on boxing, Mailer on Hemingway, Mailer on Marilyn Monroe, and, of course, Mailer on Mailer—the one subject that served as the beating heart of all of his nonfiction.From his early essay “A Credo for the Living,” published in 1948, when the author was twenty-five, to his final writings in the year before his death, Mailer wrestled with the big themes of his times. He was one of the most astute cultural commentators of the postwar era, a swashbuckling intellectual provocateur who never pulled a punch and was rarely anything less than interesting. Mind of an Outlaw spans the full arc of Mailer’s evolution as a writer, including such essential pieces as his acclaimed 1957 meditation on hipsters, “The White Negro”; multiple selections from his seminal collection Advertisements for Myself; and a never-before-published essay on Sigmund Freud.Incendiary, erudite, and unrepentantly outrageous, Norman Mailer was a dominating force on the battlefield of ideas. Featuring an incisive Introduction by Jonathan Lethem, Mind of an Outlaw forms a fascinating portrait of Mailer’s intellectual development across the span of his career as well as the preoccupations of a nation in the last half of the American century.