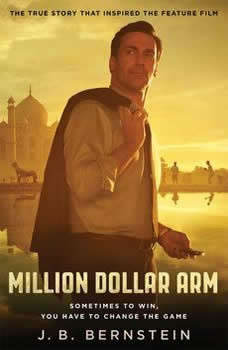 Million Dollar Arm: Sometimes to Win, You Have to Change the Game

J.B. Bernstein had reached the pinnacle of his profession. As the founder of his own sports agency, he represented such superstar athletes as Barry Bonds, Emmitt Smith, and Barry Sanders. He was on a first-name basis with icons like Michael Jordan and Wayne Gretzky. He enjoyed all the perks and prestige that came with his enormous and enviable success. And yet, in 2007, J.B. left this life behind and traveled across the world to India. He conducted a reality TV search for baseball players in a country where our national pastime is utterly foreign. In doing so, he discovered the first two Indian-born athletes to ever sign contracts with a professional U.S. sports team. J.B.'s brainchild, Million Dollar Arm, is the subject of a forthcoming Disney motion picture in theatres May 16. But the real-life story is bigger and richer than any movie could hope to convey. It is an inspiring sports drama of victory over incredible odds. It is a thought-provoking document of our globalizing world. It is an insider's look at the business of sports in the twenty-first century. It encapsulates not one but two fish-out-of-water tales J.B. in India, and Rinku Singh and Dinesh Patel in southern California and the ways in which all three men's lives have been transformed by their contact with an alien culture. Above all, it is a timeless story of baseball and the American dream.