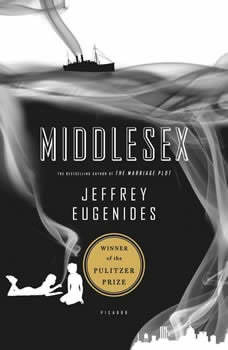 In the spring of 1974, Calliope Stephanides, a student at a girls' school, Grosse Pointe, MI, finds herself drawn to a chain-smoking, strawberry-blonde classmate with a gift for acting. The passion that furtively develops between them - along with Callie's failure to develop - leads Callie to suspect that she is not like other girls. The explanation for this shocking state of affairs takes us out of suburbia - back before the Detroit race riots of 1967, before the rise of the Motor City, to 1922, when the Turks sacked Smyrna and Callie's grandparents fled for their lives, back to a tiny village in Asia Minor where two lovers, and one rare genetic mutation, set in motion the metamorphosis that will turn Callie into a being both mythical and perfectly real: a hermaphrodite.Sprawling across eight decades - and one unusually awkward adolescence - Jeffrey Eugenide's long-awaited second novel is a grand, utterly original fable of crossed bloodlines, the intricacies of gender, and the deep, untidy promptings of desire.Winner of the 2003 Pulitzer Prize for Fiction and the Audie Award for best unabridged fiction, Middlesex marks the fulfillment of a huge talent, named one of America's best young novelists by both Granta and The New Yorker.

First of all, I should state that the reader, Kristoffer Tabori, is superb at capturing the European immigrant’s voice and attitude. His energetic, often humorous, reading made the many hours of listing to this very long book fly by. If there is a primary 'message' that Eugenides wanted to convey about gender it is probably that no amount of socialization being universally treated and accepted as one gender can overcome that person's pre-existing gender identity. This boy who thought he was and had always been treated as a girl was driven to what he believed were Lesbian desires because he could not alter or suppress his underlying gender identity. When you look at this central issue of the book's second half in this way, it seems that Eugenides has set up an elaborate, maybe improbable plot to make a fairly obvious point. But I think the strongest part of this book and the real reason to read it, is the hilarious and touching story of Greek immigrants and their children as*imilating into American society as best they can -- maybe not such an unusual story, but unusually well told in Middlesex.

This is a great book, in a weird sort of way. It is one of the books I recommend to people as a 'must read.

This is one of the best audio books I have ever listened to! A combination of a fascinating story and a wonderful reader equals storytelling at it's best. This is a story rich with humor and sadness with ordinary heros.

this was the best audio-book I've listened to yet, it was truly and amazing story- very interesting, excellent narrator too. Mark in Colorado

Captivating and educational. An interesting look at the world throught the eyes of such a confused little girl.