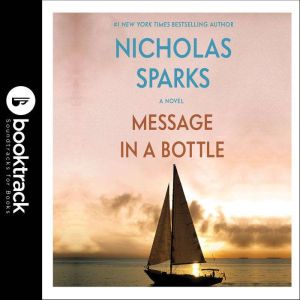 Message in a Bottle - Booktrack Edition

Message in a Bottle: Booktrack Edition adds an immersive musical soundtrack to your audiobook listening experience! * Divorced and disillusioned about relationships, Theresa Osborne is jogging when she finds a bottle on the beach. Inside is a letter of love and longing to "Catherine," signed simply "Garrett." Challenged by the mystery and pulled by emotions she doesn't fully understand, Theresa begins a search for this man that will change her life. What happens to her is unexpected, perhaps miraculous-an encounter that embraces all our hopes for finding someone special, for having a love that is timeless and everlasting.... Nicholas Sparks exquisitely chronicles the human heart. In his first bestselling novel, The Notebook, he created a testament to romantic love that touched readers around the world. Now in this New York Times bestseller, he renews our faith in destiny, in the ability of lovers to find each other no matter where, no matter when... *Booktrack is an immersive format that pairs traditional audiobook narration to complementary music. The tempo and rhythm of the score are in perfect harmony with the action and characters throughout the audiobook. Gently playing in the background, the music never overpowers or distracts from the narration, so listeners can enjoy every minute. When you purchase this Booktrack edition, you receive the exact narration as the traditional audiobook available, with the addition of music throughout.