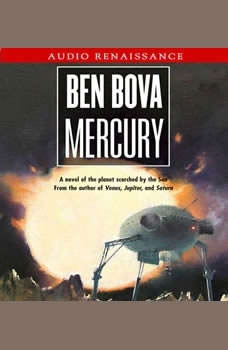 A tale of revenge and technological endeavor set on our solar system's most desolate stageDespite Mercury's desolateness, there are still those who hope to find diamonds in the rough. Saito Yamagata thinks Mercury's position will make it an ideal orbit point for satellites that could someday create enough power to propel starships into deep space. He hires Dante Alexios to bring his dreams to life. Astrobiologist Victor Molina thinks the water at Mercury's poles may harbor evidence of life, and hopes to achieve fame and glory by proving it. Bishop Elliot Danvers has been sent by the religious sect, "The New Morality," to keep close tabs on their endeavors, which threaten to produce results that contradict biblical teachings.

By Heresies Distressed
by David Weber

In David Weber's By Heresies Distressed, the battle for the soul of the planet Safehold has begun.The Kingdom of Charis and the Kingdom of Chisholm have joined together, pledged to stand against the tyranny of a corrupt Church. The youthful Queen Sh...

Bob Arctor is a dealer of the lethally addictive drug Substance D. Fred is the police agent assigned to tail and eventually bust him. To do so, Fred takes on the identity of a drug dealer named Bob Arctor. And since Substance D--which Arctor takes i...

The Restaurant at the End of the Universe
by Douglas Adams

"DOUGLAS ADAMS IS A TERRIFIC SATIRIST."--The Washington Post Book WorldFacing annihilation at the hands of the warlike Vogons is a curious time to have a craving for tea. It could only happen to the cosmically displaced Arthur Dent and his...

Children of Dune
by Frank Herbert

Frank Herbert's bestselling science fiction series of all time continues! In this third installment, the sand-blasted world of Arrakis has become green, watered and fertile. Old Paul Atreides, who led the desert Fremen to political and religious dom...

A Mighty Fortress
by David Weber

In David Weber's A Mighty Fortress, young Cayleb Ahrmahk has accomplished things few people could even dream of. Not yet even thirty years old, he's won the most crushing naval victories in human history. He's smashed a hostile alliance of no less t...