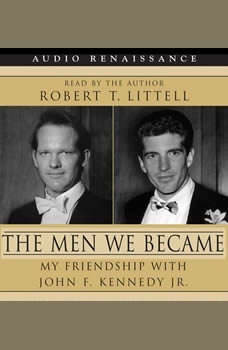 Men We Became: My Friendship with John F. Kennedy, Jr.

From youth to adulthood, Rob Littell spent 20 years alongside John F. Kennedy Jr.—through laughter and sorrow, joy and heartbreak. Now in this moving and poignant memoir of their touching friendship, Rob Littell shares his story with listenersRob Littell was a freshman at Brown when he met JFK Jr. Although Littell came from a privileged background, it was worlds apart from the glamorous life of the son of the late President and Jacqueline Kennedy Onassis. Eager to be accepted on his own terms, Kennedy responded to Littell's irreverence toward his celebrity and they became close friends. Littell recounts dinners at Jacqueline Onassis's apartment—where she surprised him with his favorite of specially burned hamburger—and weekends at her retreat in Martha's Vineyard, where she critiqued their touch football. As students, Littell and Kennedy bummed around Europe. Later, they shared apartments in New York. Later still, Littell was part of John's secret wedding to Carolyn Bessette on Cumberland Island, Georgia and three years later a pallbearer at his funeral.This is an intimate, detailed and affectionate memoir of an unusual young man by a close friend.