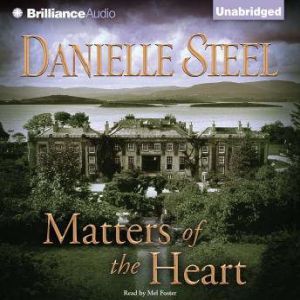 Matters of the Heart

Hope Dunne has carved out a name for herself as a top photographer, known the joys of marriage and motherhood and the heartbreak of loss. In her chic SoHo loft, Hope is content with her life, finding serenity and beauty through the lens of her camera. She isn’t looking for a man or excitement. But these things find her when she accepts a last-minute assignment to fly to London at Christmas and photograph one of the world’s most celebrated writers – an Irish-American author known for novels of thrilling literary darkness. To Hope’s surprise, Finn O’Neill exudes warmth and a boyish charm. Enormously successful, he is a perfect counterpoint to Hope’s quiet, steady grace – and he’s taken instantly by her. He courts her as no one ever has before, whisking her away to his palatial, isolated Irish estate. Hope finds it all, and him, irresistible. But soon cracks begin to appear in his stories: gaps in his history, lies and bouts of jealousy unnerve her. Suddenly Hope is both in love and suspicious, caring and deeply in doubt, and ultimately frightened of the man she loves. Alone, thousands of miles from home, her mind is reeling. Is it possible that this adoring, attentive man – like the characters in his novels – is hiding something even worse? The spell cast by a brilliant sociopath has her trapped in his web, too confused and dazzled to escape, as he continues to tighten his grip on her.