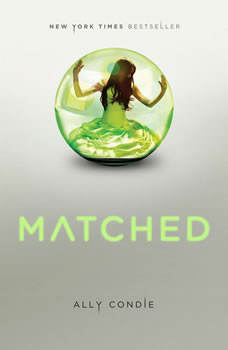 "The hottest YA title to hit bookstores since The Hunger Games."--Entertainment Weekly

This New York Times bestseller is perfect for fans of 1984, Brave New World, Black Mirror, and The Handmaid’s Tale.

Cassia has always trusted the Society to make the right choices for her: what to read, what to watch, what to believe. So when Xander's face appears on-screen at her Matching ceremony, Cassia knows he is her ideal mate . . . until she sees Ky Markham's face flash for an instant before the screen fades to black. The Society tells her it's a glitch, a rare malfunction, and that she should focus on the happy life she's destined to lead with Xander. But Cassia can't stop thinking about Ky, and as they slowly fall in love, Cassia begins to doubt the Society's infallibility and is faced with an impossible choice: between Xander and Ky, between the only life she's known and a path that no one else has dared to follow.

Look for the sequel, CROSSED, and the epic series finale, REACHED!

The first book in Lauren Oliver’s remarkable New York Times bestselling trilogy about forbidden love, revolution, and the power to choose.In an alternate United States, love has been declared a dangerous disease, and the government forces eve...

One choice can destroy you. Veronica Roth's second #1 New York Times bestseller continues the dystopian thrill ride that began in Divergent.A hit with both teen and adult readers, Insurgent is the action-packed, emotional adventure that inspired th...

Complete your Divergent library with Four!Fans of the Divergent trilogy by #1 New York Times bestselling author Veronica Roth will be thrilled by Four: A Divergent Collection, a companion volume that includes four pre-Divergent stories plus three a...

Lois Lowry’s The Giver is the quintessential dystopian novel, followed by its remarkable companions, Gathering Blue, Messenger, and Son.Jonas's world is perfect. Everything is under control. There is no war or fear of pain. There are no choice...

A New York Times bestseller!What was once the western United States is now home to the Republic, a nation perpetually at war with its neighbors. Born into an elite family in one of the Republic's wealthiest districts, fifteen-year-old June is a prod...