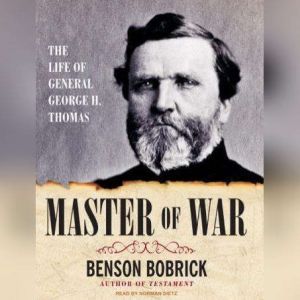 Master of War: The Life of General George H. Thomas

In this revelatory, dynamic biography, one of our finest historians, Benson Bobrick, profiles George H. Thomas, arguing that he was the greatest and most successful general of the Civil War. Because Thomas didn't live to write his memoirs, his reputation has been largely shaped by others, most notably Ulysses S. Grant and William Tecumseh Sherman, two generals with whom Thomas served and who, Bobrick says, diminished his successes in their favor in their own memoirs. Born in Virginia, Thomas survived Nat Turner's rebellion as a boy, then studied at West Point, where Sherman was a classmate. Thomas distinguished himself in the Mexican War and then returned to West Point as an instructor. When the Civil War broke out, Thomas remained loyal to the Union, unlike fellow Virginia-born officer Robert E. Lee (among others). He compiled an outstanding record as an officer in battles at Mill Springs, Perryville, and Stones River. At the Battle of Chickamauga, Thomas, at the time a corps commander, held the center of the Union line under a ferocious assault, then rallied the troops on Horseshoe Ridge to prevent a Confederate rout of the Union army. His extraordinary performance there earned him the nickname "The Rock of Chickamauga." Promoted to command of the Army of the Cumberland, he led his army in a stunning Union victory at the Battle of Chattanooga. Thomas supported Sherman on his march through Georgia in the spring of 1864, winning an important victory at the Battle of Peachtree Creek. As Sherman continued on his March to the Sea, Thomas returned to Tennessee and in the battle of Nashville destroyed the army of Confederate general John Bell Hood. It was one of the most decisive victories of the war, and Thomas won it even as Grant was on his way to remove Thomas from his command. (When Grant discovered the magnitude of Thomas's victory, he quickly changed his mind.) Thomas died of a stroke in 1870 while still on active duty. In the entire Civil War, he never lost a battle or a movement. Throughout his career, Thomas was methodical, careful, and always prepared. Unlike Grant at Shiloh, he was never surprised by an enemy. Unlike Sherman, he never panicked in battle but always remained calm and focused. He was derided by both men as "Slow Trot Thomas," but as Bobrick shows in this brilliant biography, he was quick to analyze every situation and always knew what to do and when to do it. He was not colorful like Grant and Sherman, but he was widely admired by his peers, and some, such as Grant's favorite cavalry commander, General James H. Wilson, thought Thomas the peer of any general in either army. He was the only Union commander to destroy two Confederate armies in the field. Although historians of the Civil War have always regarded Thomas highly, he has never captured the public imagination, perhaps because he has lacked an outstanding biographer—until now. This informed, judicious, and lucid biography at last gives Thomas his due.