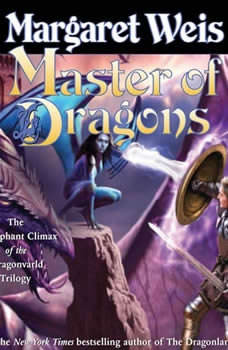 The third and concluding volume to Margaret Weis's spectacular Dragonvarld trilogy, Master of Dragons.They were twin brothers, the offspring of Dragon magic, one raised in court, the other in hiding. But, the link that exists between them will not be broken by mere distance, and in the very duality of their origin lies mankind's hope for peace and safety.When two renegade dragons with an army of crazed demi-human/dragons devise a plan to enslave all mankind—an act in direct contravention to all the precepts of the Dragon parliament—it is up to the two brothers (separate and together) and Draconas, the special emissary of the Parliament to ensure mankind's survival. Even if by doing so, it will mean the eventual doom of the Dragonkind.