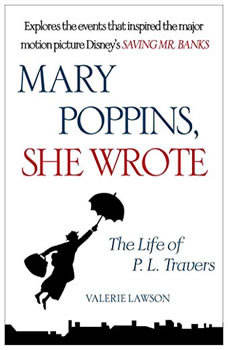 Mary Poppins, She Wrote: The Life of P. L. Travers

The making of the film Mary Poppins made into a starring role for Julie Andrews in Walt Disney's hugely successful and equally classic adaptation is being brought to life by Disney in the upcoming film, Saving Mr. Banks. Our biography of P.L. Travers, Mary Poppins, She Wrote, is the official movie tie-in and explores the events that inspired the upcoming major motion picture, telling the story of P.L. Travers travels from London to Hollywood and her struggles with Walt Disney as he adapted her novel for the big screen. Travers, whom Disney accused of vanity for "thinking you [Travers] know more about Mary Poppins than I do," was a poet and world-renowned author as tart and opinionated as Julie Andrews' big-screen Mary Poppins was cheery and porcelain-beautiful ("You've got the nose for it," Travers candidly assessed the star). Yet it was a love of mysticism and magic that shaped P. L. Travers' life as well as the very character of Mary Poppins. The clipped, strict, and ultimately mysterious nanny was the creation of someone who remained inscrutable and enigmatic to the end of her ninety-six years. "Who is P. L. Travers?" the American press inquired of "this unknown Englishwoman" whose stories had inspired the record breaking film and won her international fame. Valerie Lawson's illuminating biography, Mary Poppins She Wrote, provides the first full look at the life of the woman and writer whose personal journey is as intriguing as her beloved characters, the woman who fervently believed that "Everyday life is the miracle."