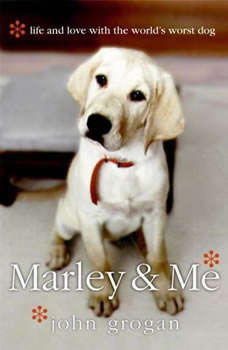 Marley & Me: Life and Love with the World's Worst Dog

John and Jenny were just beginning their life together. They were young and in love, with a perfect little house and not a care in the world. Then they brought home Marley, a wriggly yellow furball of a puppy. Life would never be the same.Marley quickly grew into a barreling, ninety-seven-pound streamroller of a Labrador retriever. He crashed through screen doors, gouged through drywall, and stole women's undergarments. Obedience school did no good -- Marley was expelled.And yet his heart was pure. Just as Marley joyfully refused any limits on his behavior, his love and loyalty were boundless, too. A dog like no other, Marley remained steadfast, a model of devotion, even when his family was at its wit's end. Unconditional love, they would learn, comes in many forms.

Through a Dog's Eyes
by Jennifer Arnold

A stirring, inspiring book with the power to change the way we understand and communicate with our dogs. Few people are more qualified to speak about the abilities and potential of dogs than Jennifer Arnold, who for the past twenty years has tr...

The New York Times-bestselling story of a puppy brought back from the brink of death, and the family he adopted.In 2002, Larry Levin and his twin sons, Dan and Noah, took their terminally ill cat to the Ardmore Animal Hospital outside Philadelphia ...

"The life of a good dog is like the life of a good person, only shorter and more compressed." So writes Pulitzer Prize-winning author Anna Quindlen about her beloved black Labrador retriever, Beau. With her trademark wisdom and humor, Quindlen ref...

Following Atticus is the remarkable true story of a man and a dog embarking on the challenge of a lifetime. This is author Tom Ryan’s inspiring tale of how he and his miniature schnauzer companion, the “Little Buddha” Atticus M. F...

Inside of a Dog
by Alexandra Horowitz

The bestselling book that asks what dogs know and how they think. The answers will surprise and delight you as Alexandra Horowitz, a cognitive scientist, explains how dogs perceive their daily worlds, each other, and that other quirky animal, the hu...

As a Navy SEAL during a combat deployment in Iraq, Mike Ritland saw a military working dog in action and instantly knew he'd found his true calling. Ritland started his own company training and supplying dogs for the SEAL teams, U.S. Government, and...