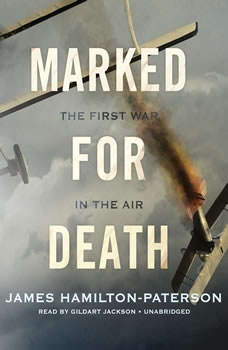 Marked for Death: The First War in the Air

A dramatic and fascinating account of aerial combat during World War I, revealing the terrible risks taken by the men who fought and died in the worlds first war in the air Little more than ten years after the first powered flight, aircraft were pressed into service in World War I. Nearly forgotten in the wars massive overall death toll, some 50,000 aircrew would die in the combatant nations fledgling air forces. The romance of aviation had a remarkable grip on the public imagination, propaganda focusing on gallant air aces who become national heroes. The reality was horribly different. Marked for Death debunks popular myth to explore the brutal truths of wartime aviation: of flimsy planes and unprotected pilots; of burning, screaming nineteen-year-olds falling to their deaths; of pilots blinded by the entrails of their observers. James Hamilton-Paterson also reveals how four years of war produced profound changes both in the aircraft themselves and in military attitudes and strategy. By 1918 it was widely accepted that domination of the air above the battlefield was crucial to military success, a realization that would change the nature of warfare forever.