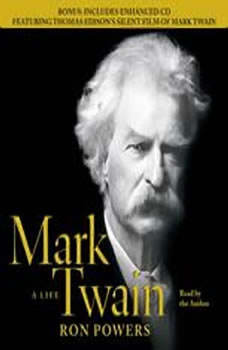 In Mark Twain, Ron Powers consummates years of research with a tour de force on the life of our culture's founding father. He offers Sam Clemens as he lived, breathed, and wrote. With the assistance of the Mark Twain Project at Berkeley, he has drawn on thousands of letters and notebook entries, many only recently discovered. Sam Clemens left his frontier boyhood in Missouri for a life on the Mississippi during the golden age of steamboats. He skirted the western theater of the Civil War before taking off for an uproarious drunken newspaper career in the Nevada of the Wild West. As his fame as a humorist and lecturer spread around the country, he took the East Coast by storm. He wooed and won his lifelong devoted wife, yet quietly pined for the girl who was his first crush. He became the toast of Europe and a celebrity who toured the globe. His comments on everything he saw, many published here for the first time, are priceless. The man that emerges in Powers's brilliant telling is both the magnetic, acerbic, and hilarious Mark Twain of myth and a devoted friend, husband, and father. Mark Twain left us our greatest voice. Samuel Clemens left us one of our most American of lives.