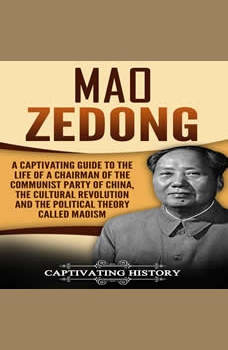 Mao Zedong: A Captivating Guide to the Life of a Chairman of the Communist Party of China, the Cultural Revolution and the Political Theory of Maoism

Mao Zedong is recognized alongside Chiang Kai-Shek and Sun Yat-Sen as one of the most influential figures of modern Chinese history. His political control of the nation waned during his later years, but he remained the Chairman of the Community Party of China since it was established in 1949 to the day he died on September 9, 1976. As the founding father of the People's Republic of China and the centerpiece of one of the world's most intense personality cults, the extent of his influence is difficult to understate.

Today, Mao's legacy can inspire slavish devotion, outright condemnation, as well as, a hesitance to look too closely at the negative aspects of his legacy. The fact that his influence spanned over nearly three decades also makes it difficult to arrive at a holistic understanding of his impact on China. The official line from the Community Party of China, which was popularized by Deng Xiaoping, is that Mao was "70 percent correct and 30 percent wrong".

This biography details Mao's remarkable journey from being the son of a peasant to one of modern history's greatest - and highly polarizing - leaders. It aims to provide a better understanding of Mao as a person and to try to unpack the personality traits and personal experiences that shaped his worldview and actions.

Get the audiobook now and learn more about Mao Zedong!