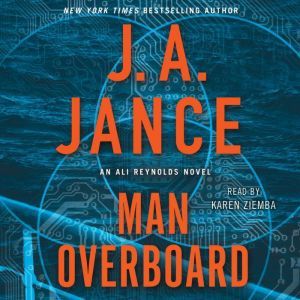 In New York Times bestselling author J.A. Jance’s gripping new thriller, Man Overboard, two tech geniuses face off—one intent on saving lives, the other on ending them.Cybersecurity expert Roger McGeary finally has his life back on track after years of struggling with depression. But when he falls from the balcony of his suite on an all-expenses-paid cruise, the police quickly dismiss it as “death by misadventure,” a vague phrase leaving much to interpretation. Unsatisfied, Roger’s tough-as-nails aunt, Julia Miller, is determined to find answers and closure. By contacting Roger’s childhood friend Stuart Ramey to help her solve the mystery of his fate, Julia unwittingly sets up a collision course with a serial killer. Stuart, his sidekick Cami Lee, and journalist turned amateur sleuth Ali Reynolds put the full resources of cutting edge online security firm High Noon Enterprises into learning the truth about Roger’s death. With Cami on the high seas investigating the ship from which Roger disappeared, Stuart stays tied to his computer, locked in a battle of wits and technology against an unusually twisted adversary. Aided by Frigg, an artificial intelligence companion of his own creation, the killer targets victims who have lost parents to suicide and attempts to drive them to the same tragic end. When the heartless killer and his cyber accomplice set their sights on Stuart, High Noon must race against time to save him and countless others.