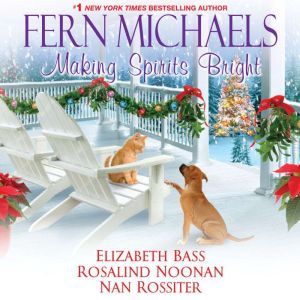 “Making Spirits Bright” by Fern MichaelsMelanie McLaughlin desperately wants to adopt two orphaned siblings and give them a real home for Christmas. A just-for-the-holiday marriage to Bryce Landry fits her plan perfectly…until unexpected sparks have Melanie dreaming of forever by his side.…“Runaway Christmas” by Elizabeth BassA glass of wine, lounging in pajamas, and catching up on movies—that’s Heidi Bogue’s idea of a perfect Christmas. Until her thirteen-year-old niece makes a surprise visit—and a snowstorm turns Heidi’s café into a community refuge. Now one handsome cop is giving Heidi plenty more reasons to celebrate.…“Home for Christmas” by Rosalind NoonanJo Truman needs a replacement Santa for her gift shop’s Christmas Eve party. She’ll do whatever it takes to convince lonely soldier Sam Norwood that he’s perfect for the part…and that the season for love is always.…“Christmas on Cape Cod” by Nan RossiterMaddie Carlson would do anything for her best friend. And helping Asa Coleman babysit a rambunctious puppy Christmas Eve night is her one chance to help the troubled teacher put his past to rest…and give the sweetest gift of all.