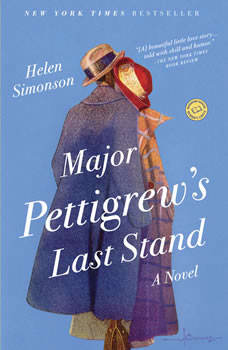 You are about to travel to Edgecombe St. Mary, a small village in the English countryside filled with rolling hills, thatched cottages, and a cast of characters both hilariously original and as familiar as the members of your own family. Among them is Major Ernest Pettigrew (retired), the unlikely hero of Helen Simonson's wondrous debut. Wry, courtly, opinionated, and completely endearing, Major Pettigrew is one of the most indelible characters in contemporary fiction, and from the very first page of this remarkable novel he will steal your heart.


The Major leads a quiet life valuing the proper things that Englishmen have lived by for generations: honor, duty, decorum, and a properly brewed cup of tea. But then his brother's death sparks an unexpected friendship with Mrs. Jasmina Ali, the Pakistani shopkeeper from the village. Drawn together by their shared love of literature and the loss of their respective spouses, the Major and Mrs. Ali soon find their friendship blossoming into something more. But village society insists on embracing him as the quintessential local and her as the permanent foreigner. Can their relationship survive the risks one takes when pursuing happiness in the face of culture and tradition?

Read Beth Hoffman's blogs and other content on the Penguin Community.Steel Magnolias meets The Help in this Southern debut novel sparkling with humor, heart, and feminine wisdom Twelve-year-old CeeCee Honeycutt is in trouble. For years, she has been...

Girl in Translation
by Jean Kwok

Introducing a fresh, exciting Chinese-American voice, an inspiring debut about an immigrant girl forced to choose between two worlds and two futures. When Kimberly Chang and her mother emigrate from Hong Kong to Brooklyn squalor, she quickly begin...

The Sandcastle Girls
by Chris Bohjalian

Over the course of his career, New York Times bestselling novelist Chris Bohjalian has taken readers on a spectacular array of journeys. Midwives brought us to an isolated Vermont farmhouse on an icy winter’s night and a home birth gone tragic...