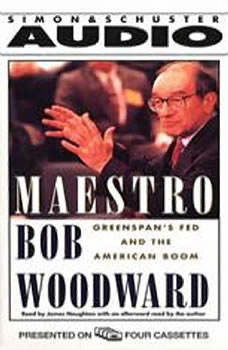 Perhaps the last Washington secret is how the Federal Reserve and its enigmatic chairman, Alan Greenspan, operate. What do they do? Why precisely do they do it? Who is Greenspan? How does he think? What is the basis for his decisions? Why is he so powerful? What kind of relationships has he had with Reagan, Bush, and Clinton -- presidents during the 13 years he has been Fed chairman? The Greenspan years, 1987 to 2000, are presented here as a gripping, intimate narrative, a remarkable portrait of how one man has become the symbol of American economic preeminence. Maestro reveals a fascinating intellectual journey. Greenspan, and old-school anti-inflation hawk of the traditional economy, was among the first to realize the potential in the modern, high-productivity new economy -- the foundation of the current American boom. Reappointed by Clinton in 2000 for another four-year term, Greenspan is slated to serve as Fed chairman until 2004. He is not only a major figure in the world's economic past, but is central to its future.