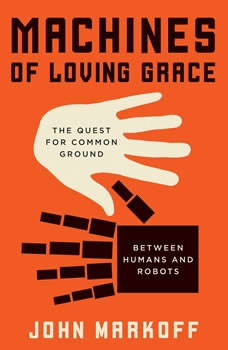 Machines of Loving Grace: The Quest for Common Ground Between Humans and Robots

This new era offers the promise of immensely powerful machines, but it also reframes a question first raised more than half a century ago, when the intelligent machine was born. Will we control these systems, or will they control us? In this sweeping history of the complicated and evolving relationship between humans and computers, Markoff traces the different ways developers have addressed this fundamental tension between man and machine and the ethical quandaries raised as the pace of technological change accelerates dramatically. We are on the brink of the next stage of the computer revolution, and robots have already begun to transform modern life. Designers must draw a bright line between what is human and what is machine. We must decide to design ourselves into our future—or risk being excluded from it altogether.