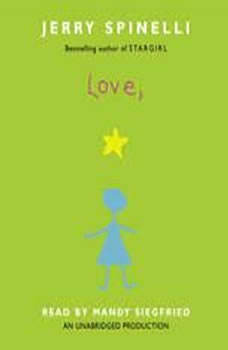 Stargirl has moved and left everything behind: Arizona, Mica High, enchanted desert places–and Leo. He’s all she can think about, and her life begins to feel like a parade of unhappy anniversaries. Then Stargirl meets her wonderfully bizarre new neighbors: Dootsie, the curly-headed five-year-old “human bean”; Betty Lou, who hasn’t stepped outside her house for nine years; Charlie, who sits among the tombstones; hot-tempered Alvina with that one glittery nail; and Perry Delloplane, the blue-eyed thief who soon lays his own claim to Stargirl’s heart.
In letters to Leo over the course of a year, Stargirl comes to find hope in new places: mockingbirds, donut angels, moon flowers, and the Winter Solstice. But what’s life without Leo? Will he–can he–answer that one crucial question she asks every morning to the rising sun?