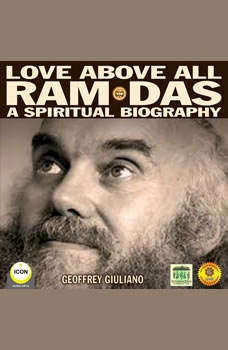 Love Above All Ram Das - A Spiritual Biography

Dr. Richard Alpert, a former Harvard professor and Timothy Leary cohort, was an icon of the 1960s hippie, LSD fueled revolution. Thereafter, on a trip to India - like Clark Kent changing into Superman - he became the much beloved spiritual teacher Baba Ram Das, whose 1970s iconic book, Be Here Now, turned on a generation to the deep, non-sectarian spirituality within us all. Author Geoffrey Giuliano became friends with Ram Das in the early '70s and traveled America playing Indian drums at his speaking engagements. During that time the two discussed the publication of some of his lectures but nothing was ever done and the two lost touch. Now, finally, after all these years, Giuliano keeps his promise to his old friend, publishing this original audio history of one of our most inspired and cherished spiritual teachers. Geoffrey Giuliano will donate all of his proceeds from this work to the Vrndavan Widows & Children's Fund of India via Sri Radhe International Inc., a New York State charity.Music by AudioNautix.