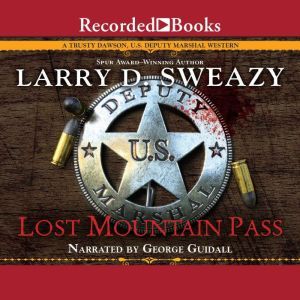 "First in a brand new series from Spur Award-winning author Larry D. Sweazy, a lawman’s grave mistake sends him gunning for justice against a gang of badmen whose violent trail of bloodshed ends at Lost Mountain Pass... Kosoma, Indian Territory. The outlaw Darby brothers have been sentenced to hang until dead. Witnessing the exectution are Amelia Darby, sister of the condemned men, as well as U.S. Deputy Marshal Sam “Trusty” Dawson and Judge Gordon Hadesworth. After justice is served, Trusty hits the trail, escorting the judge—and begrudgingly, Amelia—back to Oklahoma. Ambushed en route, the judge is murdered and Amelia vanishes, leaving Trusty to believe she led them into a trap for revenge. To find Amelia, Trusty will have to put his faith in Father Michael Darby, a fourth brother who gave up his criminal ways to take up the cloth and collar. Unwilling to let his sister continue to fall to the wicked evil that claimed the rest of his family, Michael joins the hunt for Amelia. But as their journey turns deadlier by the day, Trusty starts to doubt that Michael is truly on the righteous path…"