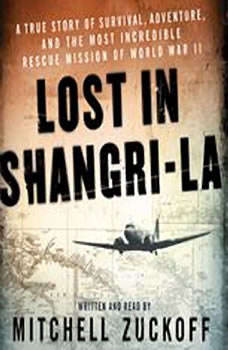 Lost in Shangri-La: A True Story of Survival, Adventure, and the Most Incredible Rescue Mission of World War II

“A lost world, man-eating tribesmen, lush andimpenetrable jungles, stranded American fliers (one of them a dame withgreat gams, for heaven's sake), a startling rescue mission. . . . This is atrue story made in heaven for a writer as talented as Mitchell Zuckoff. Whew—what an utterly compelling and deeplysatisfying read!" —Simon Winchester, author of Atlantic Award-winning former Boston Globe reporter Mitchell Zuckoffunleashes the exhilarating, untold story of an extraordinary World War IIrescue mission, where a plane crash in the South Pacific plunged a trio of U.S.military personnel into a land that time forgot. Fans of Hampton Sides’ Ghost Soldiers, Marcus Luttrell’s Lone Survivor, and David Grann’s The Lost Cityof Z will be captivated by Zuckoff’s masterfullyrecounted, all-true story of danger, daring, determination, and discovery injungle-clad New Guinea during the final days of WWII.