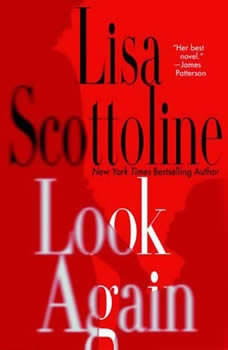 When reporter Ellen Gleeson gets a "Have You Seen This Child?" flyer in the mail, she almost throws it away. But something about it makes her look again, and her heart stops—the child in the photo is identical to her adopted son, Will. Her every instinct tells her to deny the similarity between the boys, because she knows her adoption was lawful. But she's a journalist and won't be able to stop thinking about the photo until she figures out the truth. And she can't shake the question: if Will rightfully belongs to someone else, should she keep him or give him up? She investigates, uncovering clues no one was meant to discover, and when she digs too deep, she risks losing her own life—and that of the son she loves. Lisa Scottoline breaks new ground in Look Again, a thriller that's both heart-stopping and heart-breaking, and sure to have new fans and book clubs buzzing.

Save Me
by Lisa Scottoline

From the New York Times bestselling author of Think Twice and Look Again comes an emotionally powerful novel about a split-second choice, agonizing consequences, and the need for justice Rose McKenna volunteers as a lunch mom in her daughter Melly's...

Mary DiNunzio is strong, smart, and she's got plenty of attitude. In recent years, she's become a big-time business-getter at Rosato & Associates, but the last person she expects to walk into her office is Trish Gambone, her high school rival. ...

Ms Scottoline has done it again, excellent read, such a great plot, and a great story line...a couple of great twists to this story. Try this one, you won't reget it.