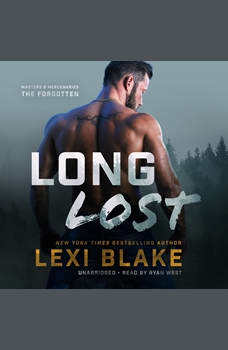 Series: The Masters and Mercenaries: The Forgotten Series #1

A stolen past The only thing Tucker remembers of his past is pain. Used in a doctor’s evil experiments, his memories and identity were erased, and his freedom taken. He believed his nightmare was over when he was liberated by the men and women of McKay-Taggart, until he heard the name Steven Reasor. The idea that he could have been involved in the terrible experiments that cost his “brothers” everything crushed him. A desperate attempt to force him to remember the truth almost cost him his life. Now his world is in chaos and his only path to finally uncover the truth and atone for his sins leads to Veronica Croft. A painful present Veronica “Roni” Croft knew Dr. Steven Reasor was bad for her, but she also saw a side of the man that no one else knew. Even as she began to believe their employer was hiding something sinister, she was drawn to him like a moth to a flame. Their affair was passionate and intense, but also fraught with danger. When he disappeared under mysterious circumstances, she took her first chance to run and never looked back. She has stayed hidden ever since, running from forces she knows are too powerful to overcome. But now the man she believed was dead, the man she mourned, has returned and needs her help. A dangerous future As Tucker and Roni unravel the secrets of his past, a dark force rises and threatens to destroy them. Their only chance for survival will require them to join forces with the Lost Boys’ worst enemy. Only together can they finally unlock Tucker’s past. But as Tucker’s memories begin to come back, will it free them both or tear them apart forever?

The Masters and Mercenaries: The Forgotten Series Bundle

Get 5% off your total order by adding 3 or more audiobooks from The Masters and Mercenaries: The Forgotten Series

Long Lost
The Masters and Mercenaries: The Fo...

Lost Hearts
The Masters and Mercenaries: The Fo...

Lost in You
The Masters and Mercenaries: The Fo...