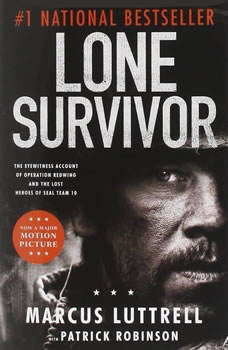 Lone Survivor: The Eyewitness Account of Operation Redwing and the Lost Heroes of SEAL Team 10

A Navy SEAL's firsthand account of American heroism during a secret military operation in Afghanistan.Inspiration for a major motion picture by Mark Wahlberg. On a clear night in late June 2005, four U.S. Navy SEALs left their base in northern Afghanistan for the mountainous Pakistani border. Their mission was to capture or kill a notorious al Qaeda leader known to be ensconced in a Taliban stronghold surrounded by a small but heavily armed force. Less then twenty-four hours later, only one of those Navy SEALs remained alive. This is the story of fire team leader Marcus Luttrell, the sole survivor of Operation Redwing, and the desperate battle in the mountains that led, ultimately, to the largest loss of life in Navy SEAL history. But it is also, more than anything, the story of his teammates, who fought ferociously beside him until he was the last one left-blasted unconscious by a rocket grenade, blown over a cliff, but still armed and still breathing. Over the next four days, badly injured and presumed dead, Luttrell fought off six al Qaeda assassins who were sent to finish him, then crawled for seven miles through the mountains before he was taken in by a Pashtun tribe, who risked everything to protect him from the encircling Taliban killers. A six-foot-five-inch Texan, Leading Petty Officer Luttrell takes us, blow-by-blow, through the brutal training of America's warrior elite and the relentless rites of passage required by the Navy SEALs. He transports us to a monstrous battle fought in the desolate peaks of Afghanistan, where the beleaguered American team plummeted headlong a thousand feet down a mountain as they fought back through flying shale and rocks. In this rich , moving chronicle of courage, honor, and patriotism, Marcus Luttrell delivers one of the most powerful narratives ever written about modern warfare-and a tribute to his teammates, who made the ultimate sacrifice for their country.

There really is not a lot to say either for or against this book in terms of convincing a potential reader of it's literary value. To put things simply I quite enjoyed the book. If you are interested in military history, have been in the military, or have family in the military you will likely enjoy this book. The story begins with an explanation of the life of Marcus Luttrell the Lone Survivor in his life leading up to his military career. Growing up in Texas, aspiring to be a SEAL, family, and life. The next progression in the story goes into BUDs training and a whole lot of bravado. I will give it to the author that it is well warranted bravado, however, many more liberal individuals may find it difficult to swallow. I admittedly take a stance somewhere in the middle and I still found the Texas is the best and our President is a brilliant man who could never be wrong overtones to be a bit unbearable at times. It is the typical military ooh rah types of things that are beaten into your head from the start and therefore are necessary to tell this type of story effectively. Another thing I found to be a turn of were various instances where the author attempts to come off as a simple and humble individual. There are remarks toward just being a simple Christian at heart when it comes to choosing the course of action that dooms the team. I found these obvious and forced attempts at being humble to be worse than arrogance. This was ridiculous considering the scope of training of these often self-admittedly trained killers who's credibility is in being hard. Mr. Luttrell does nonetheless try a time or two, to make himself out to be just a simple Christian from Texas caught in a horrible situation at no fault of his own and trying to survive. The obviously purposeful contradictions are forced and seem to show that the author himself doesn't even believe them enough to make them sound true. This is the one issue I take with the telling of the story. The simple fact of the matter is that this book is not intended to be a literary work of art. This is a true story how it is remembered by the only survivor of a team of highly trained professionals who exhibit unwaivering valor in the face of overwhelming odds. Men willing to go head on into battle without a second thought and fully willing to die for a brother in arms. The bravery deserves commending and the survival of even one man given the odds is astounding. I did enjoy the book and would recommend it to those who fit my previous description. I fear that anybody else would likely just become too irritated with the issues I listed to enjoy the meat of the story.

I read this book because I saw Mr. Luttrell on the today show talking about his experiences and being the lone survivor. I saw a man who was still deeply hurt by the events chronicled in this book. I have heard about the US Navy SEALS but didn't know very many details about them. This book goes into explicit detail about what it takes to be a SEAL and the difficulties dealing with the Taliban in Afghanistan. This book shows just what a military have to deal with, how their hands are tied, but in this book there is also examples of GRACE. Afghan villagers protected Mr. Luttrell with great threat to their lives. Be forewarned that Marcus is a proud Texan and a fan of the Republican party. That might take some people aback and might find his point of view objectionable. I recommend this book.